Pantone, the world-renowned authority on color, recently announced its color of the year to be “Ultra Violet”.  Their team of experts believes it communicates originality, ingenuity and visionary thinking that points us toward the future, making it is the perfect shade to ring in the New Year! It is the color that inspires inventiveness and imagination.

The easiest purple stone to acquire is Amethyst.  It is a variety of Quartz ad is often mistaken for purple sapphire as in the case of the famous, cursed Delhi Purple Sapphire, which was actually a very large amethyst.  Lighter Amethyst is sometimes referred to as “Rose de France”. 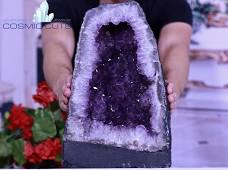 As we head to Quartzsite we’ll find many large Amethyst columns from Madegascar.  Although they are usually not gem quality, they make lovely conversation pieces.  Amethyst was once considered a precious stone. It’s known as the “Stone of Spirit,” mirroring the color of the crown chakra – our doorway to the Divine. Amethyst is used in Mala beads as a meditation tool in Tibet and is said to calm, protect, and cleanse the spirit. Its color strengthens the muscles of the eyes.

A purple stone found in the West desert of Utah is locally known as “Tiffany Stone”.  A variety of names are used to refer to this stone, including Purple Bertrandite, Opal Fluorite, Purple Passion, Purple Opal, Beryllium Ore, Bertrandite and Tiffany Stone.

This stone comes only from Utah in the USA. In the past it was almost unobtainable, as it was produced only as a by-product of the mining of The reason for mining the stone never had anything to do with crystal collectors, but was to obtain Beryllium. They use this mineral for missile nose cones, as it is said to not heat up at high speeds.

Once the mine decided to close to collectors, specimens of the stone became hard to obtain. Fortunately for collectors of these lovely stones, another mine has been opened in the last few years, that is now supplying Tiffany Stone to the crystal world. These new stones may look different to some of the old stones, but have similar metaphysical properties.

These stones are said to be a mixture of Beryllium and other minerals, including quartz, chalcedony, opal, manganese oxides and Bertrandite. These minerals formed into rock and relates to volcanic activity. They come in a mixture of beautiful colors, including purples, blues, yellows and white.

Tiffany Stone Cabochons will be our stone for the year for the Purple color.

You’ll also be able to find Amethyst stone chips at one of our four shows, and other lovely purple creations.  Purple knitted scarves will be available at our other family store on Etsy – Three Ewes.