It’s hard to believe that Tracy and I will celebrate our 17th Anniversary next week.  I don’t know where the time has gone (isn’t that what everybody says?) but it’s been good.  We don’t usually exchange gifts for events.  Most likely we’ll give when the spirit moves us or “just because”.  Especially for our anniversary, we’re usually out on the desert somewhere rockhounding, photographing, or playing desert lizard (trying to get warm). 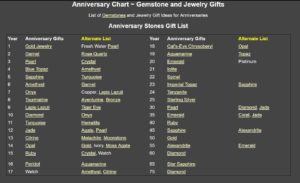 I have customers who ask about Anniversary Stones, which stone for which year.  I found this nice chart showing the traditional and alternative stones by the years.  It says I should give and receive a watch this year or Amethyst or Citrine.  I have flats of Amethyst and Citrine in the garage so they don’t seem special.  That’s not true with the ordinary customer.  And I haven’t worn a watch since 1998. I pretty much depend on my cell phone to keep track of the time.

Back then I wore a small locket watch that hung from a 32” chain.  I seem to have allergic reactions to wrist watches, so I tried the locket.  It was great, made for wonderful jewelry and brought lots of compliments.  It was not a jeweled watch, but it kept good time.  Jewels in watches have a different purpose.  Read about them at the Elgin Web Page.

So, what do I give him? Probably time.  When we’re out and about without interruptions we talk a lot, plan for the coming year, and just explore new territory.  We’re without the trailer this trip because of his open-heart surgery in December.  His recovery is going well and he’s doing the physical therapy he’s supposed to.  While we’re on the road for 10 days he can utilize the weight rooms at the hotels.  I’ll have the phone and the laptop and will attempt to keep time under control by watching him and making sure he eats right, does his exercises and limits his caffeine intake (which he overdoes on the road).

I guess I’m giving him a watch this year, just one without the physical attributes, but just as focused on time.  The jewels will be the ideas we discover based on our time talking and working.  The gems will be the results of our time together – maybe another 17 yrs.